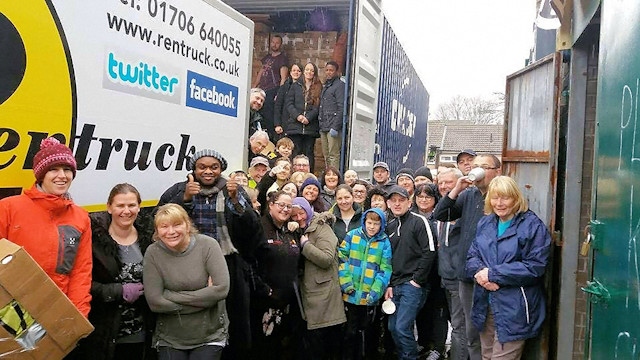 Months of collecting and donations finally paid off for local charity Reuse Littleborough, as their container of hope shipped out to Mwanza on Saturday 3 February.

With refreshments on hand, over 50 volunteers turned out at Stevenson Square to help despite the weather, working non-stop for three hours between 8 and 11am. In addition to local supporters of all ages, the group also had help from families from Nottingham, the Lake District and Cheshire.

Michael Bamford, who runs the group, said: “We had so many supporters turn up on a very cold and wet Saturday morning, working their trollies off to help load it. Three people travelled up from Nottingham, a family arrived with donations from the Lake District and a carload of very dedicated supporters arrived early from Cheshire.

“I was amazed to see a seven-year-old boy with his dad, and an elderly lady in the back of the container for the full three hours.”

Messages to the children at the Forever Angels Baby Home were posted on stickers on the inside of the doors and a massive cheer went up as the driver closed the doors of a very full container and applied the seal.

Reuse Littleborough will track the container along its journey until it lands at Dar Es Salaam in Tanzania towards the end of March. It should be at Forever Angels in early April, with Michael planning to be on hand to unload and sort the goods.

This is the second container sent to the baby home by the group. In 2016, Reuse Littleborough donated similar goods, and helped change so many children’s lives in the process.

Reuse Littleborough chose to support Forever Angels again, due to an upcoming ban on imports of used clothing entering Tanzania by 2019. New clothes have already been banned in Tanzania as part of the East African Community’s plan to boost regional trade of their diminishing textile industry.

Michael continued: “A massive shout out to all the staff members of Reuse Littleborough, as this would not have been possible without you, but also a massive thank you to every one of our members that donated so many things, the box would have been empty without you.

“We also could not have done without Graham Poole transport, who collected a disabled swing from Scotland for us, and Graffic Detail worked through the night on Friday to produce two signs to put up outside the baby home.”

He added: “Thanks to your generosity, the container is filled with eight tons of life-changing items for children and babies who have had the worst possible start in life. It was just the things that you no longer needed and cost us nothing: the things we couldn’t pack were sold in the shop, which has paid for the shipping costs. This was all achieved as planned without asking anyone for their hard-earned money.”

Reuse Littleborough hopes to relaunch in the next week, continuing to help those in need by repurposing unwanted items.